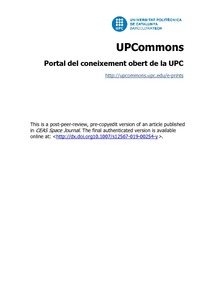 Document typeArticle
Publisherspringer-Verlag
Rights accessOpen Access
European Commission's projectDISCOVERER - DISCOVERER – DISruptive teChnOlogies for VERy low Earth oRbit platforms (EC-H2020-737183)
Abstract
For a satellite formation to maintain its intended design despite present perturbations (formation keeping), to change the formation design (reconfiguration) or to perform a rendezvous maneuver, control forces need to be generated. To do so, chemical and/or electric thrusters are currently the methods of choice. However, their utilization has detrimental effects on small satellites’ limited mass, volume and power budgets. Since the mid-80s, the potential of using differential drag as a means of propellant-less source of control for satellite formation flight is actively researched. This method consists of varying the aerodynamic drag experienced by different spacecraft, thus generating differential accelerations between them. Its main disadvantage, that its controllability is mainly limited to the in-plain relative motion, can be overcome using differential lift as a means to control the out-of-plane motion. Due to its promising benefits, a variety of studies from researchers around the world have enhanced the state-of-the-art over the past decades which results in a multitude of available literature. In this paper, an extensive literature review of the efforts which led to the current state-of-the-art of different lift and drag-based satellite formation control is presented. Based on the insights gained during the review process, key knowledge gaps that need to be addressed in the field of differential lift to enhance the current state-of-the-art are revealed and discussed. In closer detail, the interdependence between the feasibility domain/the maneuver time and increased differential lift forces achieved using advanced satellite surface materials promoting quasi-specular or specular reflection, as currently being developed in the course of the DISCOVERER project, is discussed.
CitationTraub, C. [et al.]. On the exploitation of differential aerodynamic lift and drag as a means to control satellite formation flight. "CEAS Space Journal", 27 Maig 2019, p. 1-18.
URIhttp://hdl.handle.net/2117/133556
DOI10.1007/s12567-019-00254-y
ISSN18682510
Publisher versionhttps://link.springer.com/article/10.1007/s12567-019-00254-y
Collections
Share: