A compositional method for the synthesis of asynchronous communication mechanisms 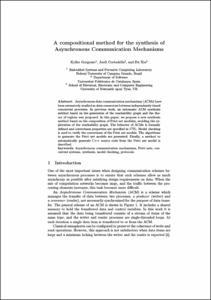 Xia, Fei
Document typePart of book or chapter of book
PublisherSpringer
Rights accessOpen Access
Abstract
Asynchronous data communication mechanisms (ACMs) have been extensively studied as data connectors between independently timed concurrent processes. In previous work, an automatic ACM synthesis method based on the generation of the reachability graph and the theory of regions was proposed. In this paper, we propose a new synthesis method based on the composition of Petri net modules, avoiding the exploration of the reachability graph. The behavior of ACMs is formally defined and correctness properties are specified in CTL. Model checking is used to verify the correctness of the Petri net models. The algorithms to generate the Petri net models are presented. Finally, a method to automatically generate C++ source code from the Petri net model is described.
CitationGorgônio, K.; Cortadella, J.; Xia, F. A compositional method for the synthesis of asynchronous communication mechanisms. A: "Petri Nets and Other Models of Concurrency, ICATPN 2007, 28th International Conference on Applications and Theory of Petri Nets and Other Models of Concurrency: Siedlce, Poland, June 25-29, 2007: proceedings". Springer, 2007, p. 144-163.
URIhttp://hdl.handle.net/2117/133432
DOI10.1007/978-3-540-73094-1
ISBN978-3-540-73093-4
Publisher versionhttps://link.springer.com/book/10.1007/978-3-540-73094-1
Collections
Share: