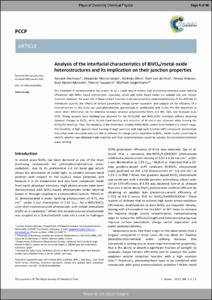 The formation of heterostructures has proven to be a viable way to achieve high photoelectrochemical water splitting efficiencies with BiVO4 based photoanodes. Especially, cobalt and nickel based oxides are suitable low cost contact materials. However, the exact role of these contact materials is not yet completely understood because of the difficulty to individually quantify the effects of surface passivation, charge carrier separation and catalysis on the efficiency of a heterostructure. In this study, we used photoelectron spectroscopy in combination with in situ thin film deposition to obtain direct information on the interface structure between polycrystalline BiVO4 and NiO, CoOx and Sn-doped In2O3 (ITO). Strong upwards band bending was observed for the BiVO4/NiO and BiVO4/CoOx interfaces without observing chemical changes in BiVO4, while limited band bending and reduction of Bi and V was observed while forming the BiVO4/ITO interface. Thus, the tunability of the Fermi level position within BiVO4 seems to be limited to a certain range. The feasibility of high upwards band bending through junctions with high work function (WF) compounds demonstrate that nickel oxide and cobalt oxide are able to enhance the charge carrier separation in BiVO4. Similar studies could help to identify whether new photoelectrode materials and their heterostructures would be suitable for photoelectrochemical water splitting.
CitationHermans, Y. [et al.]. Analysis of the interfacial characteristics of BiVO4/metal oxide heterostructures and its implication on their junction properties. "Physical chemistry chemical physics", 29 Gener 2019, núm. 9, p. 1-11.
URIhttp://hdl.handle.net/2117/133429
DOI10.1039/C8CP07483F
ISSN1463-9076