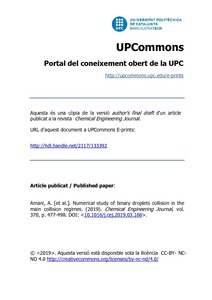 Document typeArticle
Rights accessOpen Access
Abstract
Direct numerical simulation of binary droplets collision is done using a conservative level-set method. The Navier-Stokes and level-set equations are solved using a finite-volume method on collocated grids. A novel lamella stabilization approach is introduced to numerically resolve the thin lamella film appeared during a broad range of collision regimes. This direction-independent method proves to be numerically efficient and accurate compared with experimental data. When the droplets collide, the fluid between them is pushed outward, leaving a thin gas layer bounded by the surface of two droplets. This layer progressively gets thinner and depending on the collision regime, may rupture resulting in coalescence of the droplets or may linger resulting in bouncing-off the droplets. Embedded ghost-nodes layer makes it possible to mimic both bouncing and coalescence phenomena of the droplets collision. The numerical tools introduced are validated and verified against different experimental results for a wide range of collision regimes. A very good agreement is observed between the results of this paper and experimental data available in the literature. A detailed study of the energy budget for different shares of kinetic and dissipation energies inside of the droplet and matrix, in addition to the surface tension energy for studied cases, is provided. Supplementary quantitative values of viscous dissipation rate inside of the matrix and droplet, and also the radial expansion of the droplet are presented as well.
CitationAmani, A. [et al.]. Numerical study of binary droplets collision in the main collision regimes. "Chemical engineering journal", 15 Agost 2019, vol. 370, p. 477-498.
URIhttp://hdl.handle.net/2117/133392
DOI10.1016/j.cej.2019.03.188
ISSN1385-8947
Publisher versionhttps://www.sciencedirect.com/science/article/pii/S1385894719306631
Collections
Share: