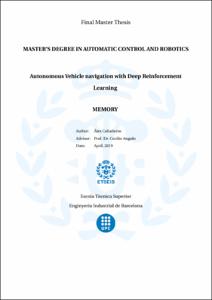 Document typeMaster thesis
Rights accessOpen Access
Abstract
The irruption of Autonomous Vehicles in transportation sector is unstoppable. However, the tran-sition from conventional vehicles to Autonomous Vehicles will not happen from one day to theother, instead, it will be a process of several years in which, gradually, new autonomous/automatedfunctionalities will be equipped to the vehicles and introduced to the customers. These auto-mated/autonomous functionalities are, nowadays, known as ADAS (Advanced Driver AssistanceSystems).The aim of this project is, through the combination of different ADAS functions, make the vehiclenavigate on a highway autonomously, but at the same time, following the traffic rules and regu-lations requirements, and also guaranteeing the safety on the road. In order to accomplish thisobjective, the proposed approach is to implement the Policy Gradient Reinforcement Learningmethod to select the proper function at each moment.The actual regulatory framework of the road safety will be explained in order to understand theADAS functions that the model will combine, as well as to know how these will evolve in the nearfuture.The algorithm will be tested using a five-lane highway simulator, previously selected after a study ofthe state-of-the-art of Autonomous Vehicles’ simulators. The vehicle will be guided by LIDAR datacoming from the sensor installed in the vehicle (sensor equipped in most of the future AutonomousVehicles).Results and performance of the model through experimentation will be presented and evaluatedusing the simulator, as well as the different network morphologies
SubjectsAutonomous vehicles, Vehicles autònoms
URIhttp://hdl.handle.net/2117/133279
Collections
Share: