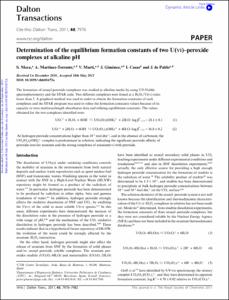 Document typeArticle
Rights accessOpen Access
All rights reserved. This work is protected by the corresponding intellectual and industrial property rights. Without prejudice to any existing legal exemptions, reproduction, distribution, public communication or transformation of this work are prohibited without permission of the copyright holder
Abstract
The formation of uranyl-peroxide complexes was studied at alkaline media by using UV-Visible spectrophotometry and the STAR code. Two different complexes were found at a H2O2/U(VI) ratio lower than 2. A graphical method was used in order to obtain the formation constants of such complexes and the STAR program was used to refine the formation constants values because of its capacity to treat multiwavelength absorbance data and refining equilibrium constants. The values obtained for the two complexes identified [...] At hydrogen peroxide concentrations higher than 10-5 mol dm-3, and in the absence of carbonate, the UO2(O2)2(OH)2 4- complex is predominant in solution, indicating the significant peroxide affinity of peroxide ions for uranium and the strong complexes of uranium(VI) with peroxide.
CitationMeca, S. [et al.]. Determination of the equilibrium formation constants of two U(VI)-peroxide complexes at alkaline pH. "Dalton transactions", 2011, vol. 40, núm. 31, p. 7976-7982.
URIhttp://hdl.handle.net/2117/13322
DOI10.1039/c0dt01672a
ISSN1477-9226
Publisher versionhttp://pubs.rsc.org/en/content/articlelanding/2011/DT/C0DT01672A
Collections
Share: