Role of feedback and broadcasting in the naming game 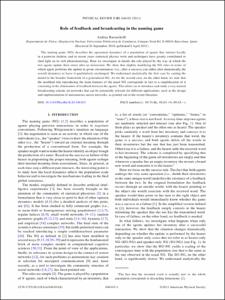 Show full item record
Baronchelli, Andrea
Document typeArticle
Rights accessOpen Access
Abstract
The naming game (NG) describes the agreement dynamics of a population of agents that interact locally in a pairwise fashion, and in recent years statistical physics tools and techniques have greatly contributed to shed light on its rich phenomenology. Here we investigate in details the role played by the way in which the two agents update their states after an interaction. We show that slightly modifying the NG rules in terms of which agent performs the update in given circumstances (i.e., after a success) can either alter dramatically the overall dynamics or leave it qualitatively unchanged. We understand analytically the first case by casting the model in the broader framework of a generalized NG. As for the second case, on the other hand, we note that the modified rule reproducing the main features of the usual NG corresponds in fact to a simplification of it consisting in the elimination of feedback between the agents. This allows us to introduce and study a very natural broadcasting scheme on networks that can be potentially relevant for different applications, such as the design and implementation of autonomous sensor networks, as pointed out in the recent literature.
CitationBaronchelli, A. Role of feedback and broadcasting in the naming game. "Physical review E: statistical, nonlinear, and soft matter physics", 2011, vol. 83, núm. 4, p. 1-6.
URIhttp://hdl.handle.net/2117/13296
DOI10.1103/PhysRevE.83.046103
ISSN1539-3755
Publisher versionhttp://pre.aps.org/abstract/PRE/v83/i4/e046103
Collections
Share: