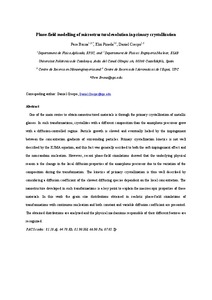 Except where otherwise noted, content on this work is licensed under a Creative Commons license : Attribution-NonCommercial-NoDerivs 2.5 Spain
Abstract
One of the main routes to obtain nanostructured materials is through the primary crystallization of metallic glasses. In such transformations, crystallites with a different composition than the amorphous precursor grow with a diffusion-controlled regime. Particle growth is slowed and eventually halted by the impingement between the concentration gradients of surrounding particles. Primary crystallization kinetics is not well described by the KJMA equation, and this fact was generally ascribed to both the soft-impingement effect and the non-random nucleation. However, recent phase-field simulations showed that the underlying physical reason is the change in the local diffusion properties of the amorphous precursor due to the variation of the composition during the transformation. The kinetics of primary crystallization is thus well described by considering a diffusion coefficient of the slowest diffusing species dependent on the local concentration. The nanostructure developed in such transformations is a key point to explain the macroscopic properties of these materials. In this work the grain size distributions obtained in realistic phase-field simulations of transformations with continuous nucleation and both constant and variable diffusion coefficient are presented. The obtained distributions are analyzed and the physical mechanisms responsible of their different features are recognized.
URIhttp://hdl.handle.net/2117/1328
Collections
Share: