Absolute determination of the Na-22(rho, gamma)Mg-23 reaction rate in novae 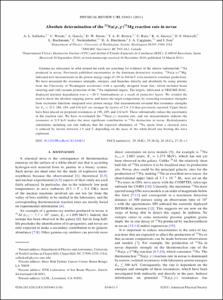 Gamma-ray telescopes in orbit around the earth are searching for evidence of the elusive radionuclide 22Na produced in novae. Previously published uncertainties in the dominant destructive reaction, 22Na(p,γ)23Mg, indicated new measurements in the proton energy range of 150 to 300 keV were needed to constrain predictions. We have measured the resonance strengths, energies, and branches directly and absolutely by using protons from the University of Washington accelerator with a specially designed beam line, which included beam rastering and cold vacuum protection of the 22Na implanted targets. The targets, fabricated at TRIUMF-ISAC, displayed minimal degradation over a ∼20 C bombardment as a result of protective layers. We avoided the need to know the absolute stopping power, and hence the target composition, by extracting resonance strengths from excitation functions integrated over proton energy. Our measurements revealed that resonance strengths for Ep = 213, 288, 454, and 610 keV are stronger by factors of 2.4–3.2 than previously reported. Upper limits have been placed on proposed resonances at 198, 209, and 232 keV. These substantially reduce the uncertainty in the reaction rate. We have re-evaluated the 22Na(p,γ) reaction rate, and our measurements indicate the resonance at 213 keV makes the most significant contribution to 22Na destruction in novae. Hydrodynamic simulations including our rate indicate that the expected abundance of 22Na ejecta from a classical nova is reduced by factors between 1.5 and 2, depending on the mass of the white-dwarf star hosting the nova explosion.
CitationSallaska, A. [et al.]. Absolute determination of the Na-22(rho, gamma)Mg-23 reaction rate in novae. "Physical review C", 23 Març 2011, vol. 83, núm. 3.
URIhttp://hdl.handle.net/2117/13276
DOI10.1103/PhysRevC.83.034611
ISSN0556-2813