Winter tourism under climate change in the Pyrenees and the French Alps: relevance of snowmaking as a technical adaptation 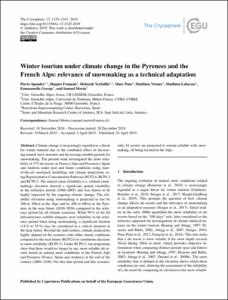 Winter tourism under climate change in the Pyrenees.pdf (2,577Mb)
Share:

Pons, Marc
Vernay, Matthieu
Lafaysse, Matthieu
George, Emmanuelle
Morin, Samuel
Document typeArticle
PublisherEuropean Geosciences Union (EGU)
Rights accessOpen Access
European Commission's projectEUCP - European Climate Prediction system (EC-H2020-776613)
Abstract
Climate change is increasingly regarded as a threat for winter tourism due to the combined effect of decreasing natural snow amounts and decreasing suitable periods for snowmaking. The present work investigated the snow reliability of 175 ski resorts in France (Alps and Pyrenees), Spain and Andorra under past and future conditions using state-of-the-art snowpack modelling and climate projections using Representative Concentration Pathways RCP2.6, RCP4.5 and RCP8.5. The natural snow reliability (i.e. without snowmaking) elevation showed a significant spatial variability in the reference period (1986–2005) and was shown to be highly impacted by the ongoing climate change. The reliability elevation using snowmaking is projected to rise by 200 to 300 m in the Alps and by 400 to 600 m in the Pyrenees in the near future (2030–2050) compared to the reference period for all climate scenarios. While 99 % of ski lift infrastructures exhibit adequate snow reliability in the reference period when using snowmaking, a significant fraction (14 % to 25 %) may be considered in a critical situation in the near future. Beyond the mid-century, climate projections highly depend on the scenario with either steady conditions compared to the near future (RCP2.6) or continuous decrease in snow reliability (RCP8.5). Under RCP8.5, our projections show that there would no longer be any snow-reliable ski resorts based on natural snow conditions in the French Alps and Pyrenees (France, Spain and Andorra) at the end of the century (2080–2100). For this time period and this scenario, only 24 resorts are projected to remain reliable with snowmaking, all being located in the Alps.
CitationSpandre, P. [et al.]. Winter tourism under climate change in the Pyrenees and the French Alps: relevance of snowmaking as a technical adaptation. "Cryosphere", 24 Abril 2019, vol. 13, p. 1325-1347.
URIhttp://hdl.handle.net/2117/132744
DOI10.5194/tc-13-1325-2019
ISSN1994-0416
Publisher versionhttps://www.the-cryosphere.net/13/1325/2019/
Collections
Share: