An assessment of ten ocean reanalyses in the polar regions 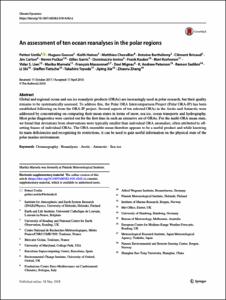 An assessment of ten ocean reanalyses in the polar regions.pdf (11,50Mb)
Share:

Except where otherwise noted, content on this work is licensed under a Creative Commons license : Attribution-NonCommercial-NoDerivs 4.0 Spain
ProjectAPPLICATE - Advanced Prediction in Polar regions and beyond: Modelling, observing system design and LInkages associated with ArctiC ClimATE change (EC-H2020-727862)
Abstract
Global and regional ocean and sea ice reanalysis products (ORAs) are increasingly used in polar research, but their quality remains to be systematically assessed. To address this, the Polar ORA Intercomparison Project (Polar ORA-IP) has been established following on from the ORA-IP project. Several aspects of ten selected ORAs in the Arctic and Antarctic were addressed by concentrating on comparing their mean states in terms of snow, sea ice, ocean transports and hydrography. Most polar diagnostics were carried out for the first time in such an extensive set of ORAs. For the multi-ORA mean state, we found that deviations from observations were typically smaller than individual ORA anomalies, often attributed to offsetting biases of individual ORAs. The ORA ensemble mean therefore appears to be a useful product and while knowing its main deficiencies and recognising its restrictions, it can be used to gain useful information on the physical state of the polar marine environment.
CitationUotila, P. [et al.]. An assessment of ten ocean reanalyses in the polar regions. "Climate Dynamics", Febrer 2019, vol. 52, núm. 3-4, p. 1613-1650.
URIhttp://hdl.handle.net/2117/132671
DOI10.1007/s00382-018-4242-z
ISSN0930-7575
Publisher versionhttps://link.springer.com/article/10.1007/s00382-018-4242-z
Collections
Share: