Radon behavior investigation based on cluster analysis and atmospheric modelling 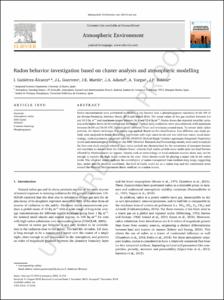 Except where otherwise noted, content on this work is licensed under a Creative Commons license : Attribution-NonCommercial-NoDerivs 3.0 Spain
Abstract
Radon measurements were performed in Huelva, a city located near a phosphogypsum repository in the SW of the Iberian Peninsula, between March 2015 and March 2016. The mean values of this gas oscillate between 5.6 and 10.9 Bq m-3 and maximum ranges between 36.4 and 53.4 Bq m-3. Radon shows the expected monthly variation with higher levels in November and December. Typical daily evolutions were also observed, with maximum between 06:00 and 08:00 UTC (Coordinated Universal Time) and minimum around noon. To extract daily radon patterns, the cluster technique of K-means was applied. Based on this classification, four different case study periods were analyzed in detail, describing two events with high radon levels and two with low radon. Local meteorology, back-trajectories computed with the HYSPLIT (Hybrid Single Particle Lagrangian Integrated Trajectory) model and meteorological fields from the WRF (Weather Research and Forecasting) model, were used to analyze the four case study periods selected. Low radon periods are characterized by the occurrence of non-pure breezes and maritime air masses from the Atlantic Ocean, whereas high radon periods occur under pure sea-land breezes affected by Mediterranean air masses. Factors such as meteorology or local emission sources alone may not be enough to explain the high radon events in the area. Other factors could be playing a major role in the radon levels. The obtained results indicate the contribution of radon transported from medium-long range, suggesting that, under specific weather conditions, the Gulf of Cadiz could act as a radon trap and the continental areas around the Western Mediterranean Basin could act as a radon source.
CitationGutiérrez, I. [et al.]. Radon behavior investigation based on cluster analysis and atmospheric modelling. "Atmospheric environment", 15 Març 2019, vol. 201, p. 50-61.
URIhttp://hdl.handle.net/2117/132642
DOI10.1016/j.atmosenv.2018.12.010
ISSN1352-2310
Publisher versionhttps://www.sciencedirect.com/science/article/pii/S1352231018308677
Collections
Share: