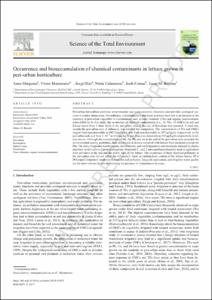 Bayona i Termens, Josep Maria
Document typeArticle
PublisherElsevier
Rights accessOpen Access
Abstract
Peri-urban horticulture performs environmental and socio-economic functions and provides ecological services to nearby urban areas. Nevertheless, industrialization and water pollution have led to an increase in the exposure of peri-urban vegetables to contaminants such as trace elements (TEs) and organic microcontaminants (OMCs). In this study, the occurrence of chemical contaminants (i.e., 16 TEs, 33 OMCs) in soil and lettuce leaves from 4 farm fields in the peri-urban area of the city of Barcelona was assessed. A rural site, outside the peri-urban area of influence, was selected for comparison. The concentration of TEs and OMCs ranged from non-detectable to 803¿mg/kg¿dw and from non-detectable to 397¿µg/kg¿dw respectively in the peri-urban soil, and from 6¿·¿10-5 to 4.91¿mg/kg¿fw and from non-detectable to 193¿µg/kg¿fw respectively in lettuce leaves. Although the concentration of Mo, Ni, Pb, and As in the soil of the peri-urban area exceeded the environmental quality guidelines, their occurrence in lettuce complied with human food standards (except for Pb). The many fungicides (carbendazim, dimetomorph, and methylparaben) and chemicals released by plastic pipelines (tris(1-chloro-2-propyl)phosphate, bisphenol F, and 2-mercaptobenzothiazole) used in agriculture were prevalent in the soil and the edible parts of the lettuce. The occurrence of these chemical pollutants in the peri-urban area did not affect the chlorophyll, lipid, or carbohydrate content of the lettuce leaves. PCA (Principal Component Analysis) showed that soil pollution, fungicide application, and irrigation water quality are the most relevant factors determining the presence of contaminants in crops.
CitationMargenat, A. [et al.]. Occurrence and bioaccumulation of chemical contaminants in lettuce grown in peri-urban horticulture. "Science of the total environment", 1 Octubre 2018, vol. 637-638, p. 1166-1174.
URIhttp://hdl.handle.net/2117/132624
DOI10.1016/j.scitotenv.2018.05.035
ISSN0048-9697
Publisher versionhttps://www.journals.elsevier.com/science-of-the-total-environment
Collections
Share: