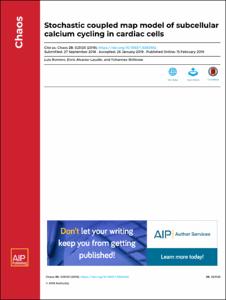 Shiferaw, Yohannes
Document typeArticle
PublisherInstitute of Physics (IOP)
Rights accessOpen Access
Abstract
In this study, we analyze a nonlinear map model of intracellular calcium (Ca) and voltage in cardiac cells. In this model, Ca release from the sarcoplasmic reticulum (SR) occurs at spatially distributed dyadic junctions that are diffusively coupled. At these junctions, release occurs with a probability that depends on key variables such as the SR load and the diastolic interval. Using this model, we explore how nonlinearity and stochasticity determine the spatial distribution of Ca release events within a cardiac cell. In particular, we identify a novel synchronization transition, which occurs at rapid pacing rates, in which the global Ca transient transitions from a period 2 response to a period 1 response. In the global period 2 response dyadic junctions fire in unison, on average, on alternate beats, while in the period 1 regime, Ca release at individual dyads is highly irregular. A close examination of the spatial distribution of Ca reveals that in the period 1 regime, the system coarsens into spatially out-of-phase regions with a length scale much smaller than the system size, but larger than the spacing between dyads.We have also explored in detail the coupling to membrane voltage. We study first the case of positive coupling, where a large Ca transient promotes a long action potential duration (APD). Here, the coupling to voltage synchronizes Ca release so that the system exhibits a robust period 2 response that is independent of initial conditions. On the other hand, in the case of negative coupling, where a large Ca transient tends to shorten the APD, we find a multitude of metastable states which consist of complex spatially discordant alternans patterns. Using an analogy to equilibrium statistical mechanics, we show that the spatial patterns observed can be explained by a mapping to the Potts model, with an additional term that accounts for a global coupling of spin states. Using this analogy, we argue that Ca cycling in cardiac cells exhibits complex spatiotemporal patterns that emerge via first or second order phase transitions. These results show that voltage and Ca can interact in order to induce complex subcellular responses, which can potentially lead to heart rhythm disorders.
CitationRomero, L.; Alvarez-Lacalle, E.; Shiferaw, Y. Stochastic coupled map model of subcellular calcium cycling in cardiac cells. "Chaos : an interdisciplinary journal of nonlinear science", 1 Febrer 2019, vol. 29.
URIhttp://hdl.handle.net/2117/132496
DOI10.1063/1.5063462
ISSN1054-1500
Publisher versionhttps://aip.scitation.org/doi/10.1063/1.5063462
Collections
Share: