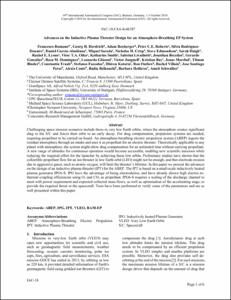 Document typeConference report
PublisherInternational Astronautical Federation
Rights accessOpen Access
European Commission's projectDISCOVERER - DISCOVERER – DISruptive teChnOlogies for VERy low Earth oRbit platforms (EC-H2020-737183)
Abstract
Challenging space mission scenarios include those in very low Earth orbits, where the atmosphere creates significant drag to the S/C and forces their orbit to an early decay. For drag compensation, propulsion systems are needed, requiring propellant to be carried on-board. An atmosphere-breathing electric propulsion system (ABEP) ingests the residual atmosphere through an intake and uses it as propellant for an electric thruster. Theoretically applicable to any planet with atmosphere, the system might allow drag compensation for an unlimited time without carrying propellant. A new range of altitudes for continuous operation would become accessible, enabling new scientific missions while reducing the required effort for the launcher by achieving these low orbits. Preliminary studies have shown that the collectible propellant flow for an ion thruster in low Earth orbit (LEO) might not be enough, and that electrode erosion due to aggressive gases, such as atomic oxygen, will limit the thruster’s lifetime. In this paper we present the advances on the design of an inductive plasma thruster (IPT) for the ABEP. The IPT is based on a small-scale inductively heated plasma generator IPG6-S. IPG have the advantage of being electrodeless, and have already shown high electric-tothermal coupling efficiencies using O2 and CO2 as propellant. IPG6-S requires a scaling of the discharge channel to meet with power requirement and expected collected mass flows, as well as optimisation of the accelerating stage, to provide the required thrust to the spacecraft. Tests have been performed to verify some of the parameters and are as well presented within this paper.
CitationRomano, F. [et al.]. Advances on the Inductive Plasma Thruster Design for an Atmosphere-Breathing EP System. A: International Astronautical Congress. "69th International Astronautical Congress (IAC 2018): Bremen, Germany 1-5 October 2018". International Astronautical Federation, 2018, p. 10686-10691.
URIhttp://hdl.handle.net/2117/132439
ISBN978-1-5108-8165-5
Publisher versionhttps://iafastro.directory/iac/archive/browse/IAC-18/
Collections
Share: