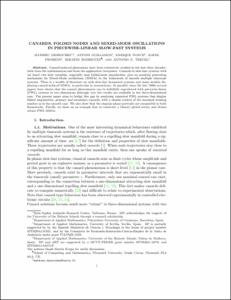 Except where otherwise noted, content on this work is licensed under a Creative Commons license : Attribution-NonCommercial-NoDerivs 3.0 Spain
Abstract
Canard-induced phenomena have been extensively studied in the last three decades, from both the mathematical and the application viewpoints. Canards in slow-fast systems with (at least) two slow variables, especially near folded-node singularities, give an essential generating mechanism for mixed-mode oscillations (MMOs) in the framework of smooth multiple timescale systems. There is a wealth of literature on such slow-fast dynamical systems and many models displaying canard-induced MMOs, particularly in neuroscience. In parallel, since the late 1990s several papers have shown that the canard phenomenon can be faithfully reproduced with piecewise-linear (PWL) systems in two dimensions, although very few results are available in the three-dimensional case. The present paper aims to bridge this gap by analyzing canonical PWL systems that display folded singularities, primary and secondary canards, with a similar control of the maximal winding number as in the smooth case. We also show that the singular phase portraits are compatible in both frameworks. Finally, we show using an example how to construct a (linear) global return and obtain robust PWL MMOs.
CitationDesroches, M. [et al.]. Canards, folded nodes and mixed-mode oscillations in piecewise-linear slow-fast systems. "SIAM review", 3 Novembre 2016, vol. 58, núm. 4, p. 653-691.
URIhttp://hdl.handle.net/2117/132380
DOI10.1137/15M1014528
ISSN0036-1445
Publisher versionhttp://epubs.siam.org/doi/10.1137/15M1014528
Collections
Share: