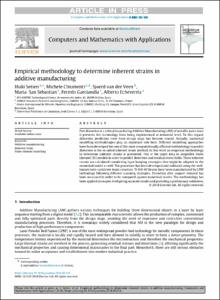 van der Veen, Sjoerd
San Sebastian Ormazabal, Maria
Document typeArticle
Rights accessOpen Access
Abstract
Part distortion is a critical issue during Additive Manufacturing (AM) of metallic parts since it prevents this technology from being implemented at industrial level. To this regard, distortion prediction even from design stage has become crucial. Actually, numerical modelling methodologies play an important role here. Different modelling approaches have been developed but one of the most computationally efficient methodology to predict distortion is the so called inherent strain method. In this work an empirical methodology to determine inherent strains is presented. This is the input data in simplified Finite Element (FE) models in order to predict distortion and residual stress fields. These inherent strains are calculated considering layer lumping strategies that might be adopted in the numerical model as well. The procedure has been developed and validated using the well-known twin-cantilever beam structure. Ti-6Al-4V beams have been manufactured by LPBF technology following different scanning strategies. Distortion after support removal has been measured in order to be compared against numerical results. The methodology has been applied at coupon level giving accurate results and providing a preliminary validation.
CitationSetien, I. [et al.]. Empirical methodology to determine inherent strains in additive manufacturing. "Computers & mathematics with applications", Octubre 2019, vol. 78, núm. 7, p. 2282-2295.
URIhttp://hdl.handle.net/2117/132354
DOI10.1016/j.camwa.2018.05.015
ISSN0898-1221
Publisher versionhttps://www.sciencedirect.com/science/article/pii/S0898122118302839
Collections
Share: