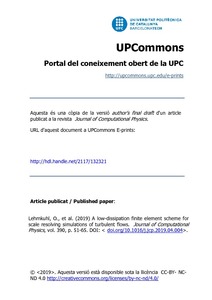 Document typeArticle
Rights accessOpen Access
Abstract
The present work extends the conservative convective scheme proposed by Charnyi et al. (2017) [13], originally formulated for mixed finite elements and tested in laminar flows, to equal order finite elements. A non-incremental fractional-step method is used to stabilise pressure, allowing the use of finite element pairs that do not satisfy the inf-sup conditions, such as equal order interpolation for the velocity and pressure used in this work. The final scheme preserves momentum and angular momentum at the discrete level; the error in the conservation of kinetic energy introduced by this stabilisation is of O (dt,h^2) in the case of linear finite elements. The low dissipation strategy is tested on a set of relevant turbulent cases. First, by using direct numerical simulation on the inviscid and viscous Taylor-Green vortex problem at Re =1600 and later, coupled with the Vreman (2004) [25]sub-grid stress model for performing large-eddy simulations on a turbulent channel flow at Ret=950, the flow past a sphere at ReD=10^4 and the flow around an Ahmed body at ReH=2 ×10^5. In all cases the performance of the presented formulation is fairly good and it has been capable of reproducing the reference results with good accuracy.
CitationLehmkuhl, O. [et al.]. A low-dissipation finite element scheme for scale resolving simulations of turbulent flows. "Journal of computational physics", 1 Agost 2019, vol. 390, p. 51-65.
URIhttp://hdl.handle.net/2117/132321
DOI10.1016/j.jcp.2019.04.004
ISSN0021-9991
Publisher versionhttps://www.sciencedirect.com/science/article/pii/S0021999119302372
Collections
Share: