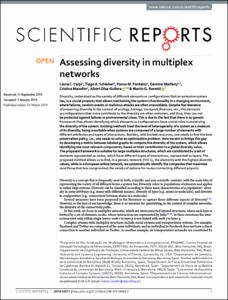 Díaz Guilera, Albert
Ravetti, Martin G.
Document typeArticle
PublisherNature
Rights accessOpen Access
Abstract
Diversity, understood as the variety of different elements or configurations that an extensive system has, is a crucial property that allows maintaining the system’s functionality in a changing environment, where failures, random events or malicious attacks are often unavoidable. Despite the relevance of preserving diversity in the context of ecology, biology, transport, finances, etc., the elements or configurations that more contribute to the diversity are often unknown, and thus, they can not be protected against failures or environmental crises. This is due to the fact that there is no generic framework that allows identifying which elements or configurations have crucial roles in preserving the diversity of the system. Existing methods treat the level of heterogeneity of a system as a measure of its diversity, being unsuitable when systems are composed of a large number of elements with different attributes and types of interactions. Besides, with limited resources, one needs to find the best preservation policy, i.e., one needs to solve an optimization problem. Here we aim to bridge this gap by developing a metric between labeled graphs to compute the diversity of the system, which allows identifying the most relevant components, based on their contribution to a global diversity value. The proposed framework is suitable for large multiplex structures, which are constituted by a set of elements represented as nodes, which have different types of interactions, represented as layers. The proposed method allows us to find, in a genetic network (HIV-1), the elements with the highest diversity values, while in a European airline network, we systematically identify the companies that maximize (and those that less compromise) the variety of options for routes connecting different airports.
CitationCarpi, L. [et al.]. Assessing diversity in multiplex networks. "Scientific reports", 14 Març 2019, vol. 9, p. 4511-1-4511-12.
URIhttp://hdl.handle.net/2117/132152
DOI10.1038/s41598-019-38869-0
ISSN2045-2322
Publisher versionhttps://www.nature.com/articles/s41598-019-38869-0
Collections
Share:

Except where otherwise noted, content on this work is licensed under a Creative Commons license : Attribution Generic