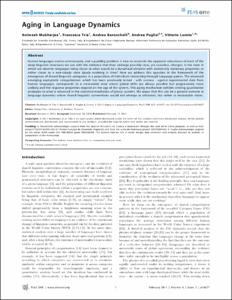 Show full item record
Mukherjee, Animesh
Tria, Francesca
Baronchelli, Andrea
Puglisic, Andrea
Loreto, Vittorio
Document typeArticle
Rights accessOpen Access
Abstract
Human languages evolve continuously, and a puzzling problem is how to reconcile the apparent robustness of most of the deep linguistic structures we use with the evidence that they undergo possibly slow, yet ceaseless, changes. Is the state in which we observe languages today closer to what would be a dynamical attractor with statistically stationary properties or rather closer to a non-steady state slowly evolving in time? Here we address this question in the framework of the emergence of shared linguistic categories in a population of individuals interacting through language games. The observed emerging asymptotic categorization, which has been previously tested - with success - against experimental data from human languages, corresponds to a metastable state where global shifts are always possible but progressively more unlikely and the response properties depend on the age of the system. This aging mechanism exhibits striking quantitative analogies to what is observed in the statistical mechanics of glassy systems. We argue that this can be a general scenario in language dynamics where shared linguistic conventions would not emerge as attractors, but rather as metastable states.
CitationMukherjee, A. [et al.]. Aging in language dynamics. "PLoS ONE Journal Information", 17 Febrer 2011, vol. 6, núm. 2.
URIhttp://hdl.handle.net/2117/13211
DOI10.1371/journal.pone.0016677
ISSN1932-6203
Publisher versionhttp://www.plosone.org/article/info%3Adoi%2F10.1371%2Fjournal.pone.0016677
Collections
Share: