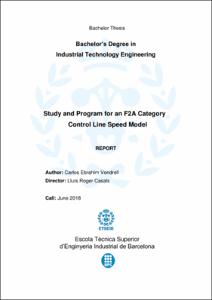 This thesis sets out to study as many variables of the flight of an F2A Speed category control line modelas possible. An Excel program has been created together with this reportto allow enthusiasts to test the parameters of their models and quickly determine what their performance will be, in terms of drag and lift forces involved, stretching of the controllines and required engine power.As an example, a concrete study has been developedaround a world record breaking model, Barcelona 96, owned by a local former world champion, Lluís Parramón. Throughout the thesis, the performance of this model will be studied in depth, identifying its optimalangle of attack once in a steady state sustained flight., the lift force this angle produces and the effect it has on the model`s drag.Apart from the drag force generated by the model, it will be proven that the drag producedby the long,thin,control linesare a much greater concern,as theyend up accounting for most of the total drag. Many integration techniques will be used once equations relating differential drag forces foreach of the model’s sectionshas been found. Furthermore, the shape the lines acquire due to the forces they are submitted to will be plotted, in all three directions they can deform.Lastly, a study of the pitching moment of the model will be carried out to be able to tell where the centre of gravity should be placed, and how to solve the problem of pitching if little liberty is had over the choice of the centre of gravity’s placement.The results of the study hope to provide clear optimal values forall three flight angles of the model, together with a compilation of forces it is submitted to. Furthermore, the speed whichwouldbe recorded in official timed eventhas also been computed as it varies depending on the stretch of the control lines.
SubjectsAirplanes, Avions -- Càlcul -- Simulació per ordinador
URIhttp://hdl.handle.net/2117/131903