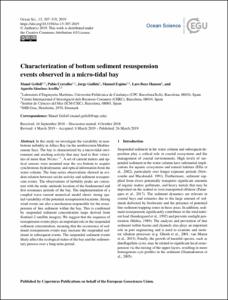 Document typeArticle
Rights accessOpen Access
European Commission's projectCEASELESS - Copernicus Evolution and Aplications with Sentinel Enhancements and Land Effluents for Shores and Seas (EC-H2020-730030)
Abstract
In this study we investigate the variability in near-bottom turbidity in Alfacs Bay (in the northwestern Mediterranean Sea). The bay is characterized by a micro-tidal environment and seiching activity that may lead to flow velocities of more than 50 cm s−1. A set of current meters and optical sensors were mounted near the sea bottom to acquire synchronous hydrodynamic and optical information from the water column. The time-series observations showed an evident relation between seiche activity and sediment resuspension events. The observations of turbidity peaks are consistent with the node–antinode location of the fundamental and first resonance periods of the bay. The implementation of a coupled wave–current numerical model shows strong spatial variability of the potential resuspension locations. Strong wind events are also a mechanism responsible for the resuspension of fine sediment within the bay. This is confirmed by suspended sediment concentration maps derived from Sentinel-2 satellite imagery. We suggest that the sequence of resuspension events plays an important role in the suspended sediment concentration, meaning that the occurrence of sediment resuspension events may increase the suspended sediment in subsequent events. The suspended sediment events likely affect the ecological status of the bay and the sedimentary process over a long-term period.
CitationGrifoll, M. [et al.]. Characterization of bottom sediment resuspension events observed in a micro-tidal bay. "Ocean science", Març 2019, vol. 15, núm. 2, p. 307-319.
URIhttp://hdl.handle.net/2117/131823
DOI10.5194/os-15-307-2019
ISSN1812-0792
Publisher versionhttps://www.ocean-sci.net/15/307/2019/os-15-307-2019.html
Collections
Share: