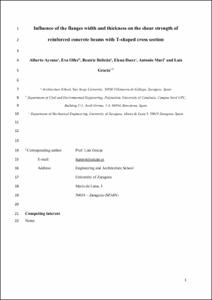 Except where otherwise noted, content on this work is licensed under a Creative Commons license : Attribution-NonCommercial-NoDerivs 3.0 Spain
ProjectEVALUACION DE LA CAPACIDAD RESISTENTE FRENTE A ESFUERZOS TANGENTES DE ESTRUCTURAS DE HORMIGON MEDIANTE MODELOS MECANICOS PARA LA EXTENSION DE SU VIDA UTIL (MINECO-BIA2015-64672-C4-1-R)
Abstract
Shear design of reinforced concrete beams with T section considers only the contribution of the web, mainly provided by aggregate interlock. However, as the load increases and large web crack openings take place, aggregate interlock reduces and shear stresses tend to concentrate near the neutral axis, usually located in the flanges of T beams, whose contribution to shear strength may be not negligible, as it has been experimentally observed. Thus, the contribution of flanges may drive to considerable cost savings in new structures and may become decisive when evaluating the shear capacity of existing structures. To quantify such contribution, a nonlinear 3D-FEA model has been developed and calibrated with the results of shear tests performed on RC T-beams by the authors. Once adjusted, the model has been used to analyze the shear response of beams with different geometry and longitudinal reinforcement, usual in practice. It has been found that, up to certain limits, the contribution of the flanges to the shear strength increases as the amount of longitudinal reinforcement decreases, as the flanges width increases and as the flange thickness increases. The maximum contribution of flanges found in the present study is 31.3% of the total shear resisted. Furthermore, the numerical model has been used to visualize and quantify aspects that are not easy to obtain experimentally, such as the distribution of the shear stresses between the web and the flanges. The present study will contribute to derive a design expression for the shear effective flanges width of T beams.
CitationAyensa, A. [et al.]. Influence of the flanges width and thickness on the shear strength of reinforced concrete beams with T-shaped cross section. "Engineering structures", Juny 2019, vol. 188, p. 506-518.
URIhttp://hdl.handle.net/2117/131803
DOI10.1016/j.engstruct.2019.03.057
ISSN1873-7323
Publisher versionhttps://www.sciencedirect.com/science/article/pii/S0141029618334254
Collections
Share: