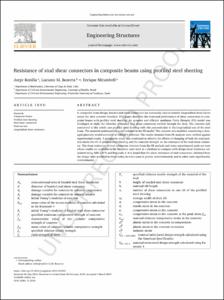 Document typeArticle
PublisherElsevier
Rights accessOpen Access
Abstract
In composite beam design, headed stud shear connectors are commonly used to transfer longitudinal shear forces across the steel-concrete interface. This paper describes the structural performance of shear connection in composite beams with profiled steel sheeting. An accurate and efficient nonlinear Finite Element (FE) model was developed to study the behavior of headed stud shear connectors welded through the deck. The concrete slab considered in this article uses profiled steel sheeting with ribs perpendicular to the longitudinal axis of the steel beam. The material nonlinearities were included in the FE model. The concrete was modeled considering a damaged plasticity model available in ABAQUS software. The results obtained from FE analysis were verified against experimental results. A parametric study was conducted to observe the effects of changing of both the stud position inside the rib of profiled steel sheeting and the concrete strength on the resistance of the stud shear connector. The shear resistance of stud connectors obtained from the FE analysis and many experimental push-out tests whose results are available in the literature were used as a database to compare with design shear resistance calculated using AISC-LRFD and Eurocode 4. It is found that the shear resistance of stud connectors, obtained from the design rules specified in these codes, in some cases is greatly underestimated, and in other cases significantly overestimated.
CitationBonilla, J.; Bezerra, L.; Mirambell, E. Resistance of stud shear connectors in composite beams using profiled steel sheeting. "Engineering structures", Maig 2019, vol. 187, p. 478-489.
URIhttp://hdl.handle.net/2117/131800
DOI10.1016/j.engstruct.2019.03.004
ISSN1873-7323
Publisher versionhttps://www.sciencedirect.com/science/article/pii/S0141029619308703
Other identifiershttps://www.researchgate.net/publication/331650465_Resistance_of_stud_shear_connectors_in_composite_beams_using_profiled_steel_sheeting
Collections
Share: