Molecular detection of Bartonella bacilliformis in Lutzomyia maranonensis in Cajamarca, Peru: a new potential vector of Carrion's disease in Peru? 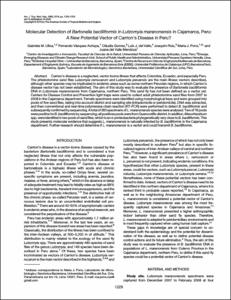 Except where otherwise noted, content on this work is licensed under a Creative Commons license : Attribution-NonCommercial-NoDerivs 3.0 Spain
Abstract
Carrion’s disease is a neglected, vector-borne illness that affects Colombia, Ecuador, and especially Peru. The phlebotomine sand flies Lutzomyia verrucarum and Lutzomyia peruensis are the main illness vectors described, although other species may be implicated in endemic areas such as some northern Peruvian regions, in which Carrion’s disease vector has not been established. The aim of this study was to evaluate the presence of Bartonella bacilliformis DNA in Lutzomyia maranonensis from Cajamarca, northern Peru. This sand fly has not been defined as a vector yet. Centers for Disease Control and Prevention light traps were used to collect adult phlebotomine sand flies from 2007 to 2008 in the Cajamarca department. Female specimens were identified using morphological keys and were grouped into pools of five sand flies, taking into account district and sampling site (intradomicile or peridomicile). DNA was extracted, and then conventional and real-time polymerase chain reaction (RT-PCR) were performed to detect B. bacilliformis and subsequently confirmed by sequencing. A total of 383 specimens of L. maranonensis species were analyzed. Two of 76 pools were positive for B. bacilliformis by sequencing; all positives pools were from Querocotillo district. In addition, Mesorhizobium spp. were identified in two pools of sand flies, which is an a-proteobacteria phylogenetically very close to B. bacilliformis. This study presents molecular evidence that suggests L. maranonensis is naturally infected by B. bacilliformis in the Cajamarca department. Further research should determine if L. maranonensis is a vector and could transmit B. bacilliformis.
Location
1: Jiron Ramon Castilla 420, Cutervo 06701, Perú
CitationUlloa, G. [et al.]. Molecular detection of Bartonella bacilliformis in Lutzomyia maranonensis in Cajamarca, Peru: a new potential vector of Carrion's disease in Peru?. "American journal of tropical medicine and hygiene", 7 Novembre 2018, vol. 99, núm. 5, p. 1229-1233.
URIhttp://hdl.handle.net/2117/131601
DOI10.4269/ajtmh.18-0520
ISSN0002-9637
Publisher versionhttp://www.ajtmh.org/content/journals/10.4269/ajtmh.18-0520
Collections
Share: