Resource identification in fog-to-cloud systems: toward an identity management strategy 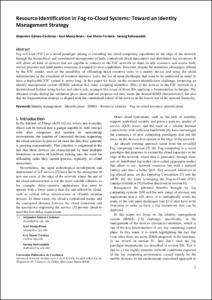 Document typeArticle
Rights accessOpen Access
Abstract
og-to-Cloud (F2C) is a novel paradigm aiming at extending the cloud computing capabilities to the edge of the network through the hierarchical and coordinated management of both, centralized cloud datacenters and distributed fog resources. It will allow all kinds of devices that are capable to connect to the F2C network to share its idle resources and access both, service provider and third parties’ resources to expand its own capabilities. However, despite the numerous advantages offered by the F2C model, such as the possibility of offloading delay-sensitive tasks to a nearby device and using the cloud infrastructure in the execution of resource-intensive tasks, the list of open challenges that needs to be addressed to have a deployable F2C system is pretty long. In this paper we focus on the resource identification challenge, proposing an identity management system (IDMS) solution that starts assigning identifiers (IDs) to the devices in the F2C network in a decentralized fashion using hashes and afterwards, manages the usage of those IDs applying a fragmentation technique. The obtained results during the validation phase show that our proposal not only meets the desired IDMS characteristics, but also that the fragmentation strategy is aligned with the constrained nature of the devices in the lowest tier of the network hierarchy.
CitationGomez, A. [et al.]. Resource identification in fog-to-cloud systems: toward an identity management strategy. "Journal of Reliable Intelligent Environments", 12 Abril 2019, vol. 5, núm. 1, p. 29-40.
URIhttp://hdl.handle.net/2117/131333
DOI10.1007/s40860-019-00074-1
ISSN2199-4676
Publisher versionhttps://link.springer.com/article/10.1007%2Fs40860-019-00074-1
Collections
Share: