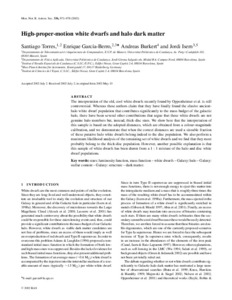 The interpretation of the old, cool white dwarfs recently found by Oppenheimer et al. is still controversial. Whereas these authors claim that they have finally found the elusive ancienthalo white dwarf population that contributes significantly to the mass budget of the galactic halo, there have been several other contributions that argue that these white dwarfs are not genuine halo members but, instead, thick-disc stars. We show here that the interpretation of this sample is based on the adopted distances, which are obtained from a colour–magnitude calibration, and we demonstrate that when the correct distances are used a sizeable fraction of these putative halo white dwarfs belong indeed to the disc population. We also perform a maximum likelihood analysis of the remaining set of white dwarfs and we find that they most probably belong to the thick-disc population. However, another possible explanation is that this sample of white dwarfs has been drawn from a 1 : 1 mixture of the halo and disc white dwarf populations.
CitationTorres Gil,S; Garcia-Berro Montilla, E.; Burkert, A.; Isern, J. High-proper-motion white dwarfs and halo dark matter. Monthly Notices of the Royal Astronomical Society, 2002, vol 336, p 971–978 (2002)
URIhttp://hdl.handle.net/2117/1313