Crater formation by the rupture of underground natural gas pipelines: a probabilistic-based model 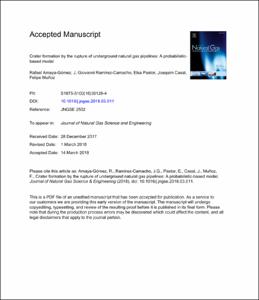 Muñoz Giraldo, Felipe
Document typeArticle
PublisherElsevier
Rights accessOpen Access
Abstract
Parallel and crossing pipelines are frequently implemented due to land-use restrictions and their ease of operation and maintenance. Given the proximity of these pipelines and the hazardousness of the substances they transport, an eventual Loss of Containment (LOC) in a parallel/crossing corridor can lead to a domino effect that should be considered in Quantitative Risk Analysis (QRA). For underground pipelines, this LOC is accompanied by a formation of a crater, which can uncover adjacent pipelines triggering a domino effect scenario to take place. This paper aims to develop a model to predict feasible crater dimensions (i.e., width and depth) from a LOC in underground natural gas pipelines using operational and structural parameters. For this purpose, a recent review of 57 underground natural gas pipeline accidents were considered in a probability-based approach once data was processed. This approach initially predicts the Width-to-Depth crater ratio (WD) using a multivariate regression. Then feasible crater dimensions were determined using the regression prediction interval and the width-depth joint probability function, which is approximated with a Gaussian copula. This approach proposes a worst, mean and less severe scenarios to support decision-making processes regarding parallel or crossing underground natural gas pipelines with a LOC. Besides the identification of domino effect scenarios, this information can be used to support pipeline segmentation for risk analysis or even to support Right-of-Way (ROW) definition during pipeline installation.
CitationAmaya, R. [et al.]. Crater formation by the rupture of underground natural gas pipelines: a probabilistic-based model. "Journal of natural gas science and engineering", 1 Juny 2018, vol. 54, p. 224-239.
URIhttp://hdl.handle.net/2117/131169
DOI10.1016/j.jngse.2018.03.011
ISSN1875-5100
Publisher versionhttps://www.sciencedirect.com/science/article/pii/S1875510018301264
Collections
Share: