Iberian motorways of the sea. An overview after 15 years of of Van Miert report 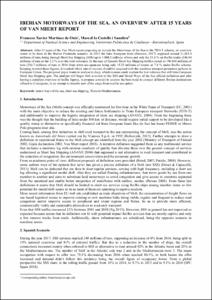 Document typeConference report
Rights accessOpen Access
Abstract
After 15 years of the Van Miert report proposing to include the Motorways of the Sea in the TEN-T schema, an overview wants to be done in the Iberian Peninsula scenario. In 2015 the Intra European trade (Eurostat, 2017) supposed around 11,263.4 millions of tons, being through Short Sea Shipping (SSS) up to 1.808,5 millions of tons and only the 13.6 % on Ro/Ro trades (246.04 millions of tons or the 2.2 % over the total volumes). In the case of Spanish Short Sea Shipping traffics raised to 196.668 millions of tons (234.7 millions of tons in 2016 from www.spc-spain.es) being only 15.33 millions of tonnes or 7.8 % under Ro/Ro schema. Keeping in mind these figures, it is asked which rate of success should be acquired with the maritime transport promotion policies in European Union. The proposed paper wants to analyse in deep, which reasons could explain the low volumes that still Intra European Short Sea Shipping gets. The analysis will begin with a review of the SSS and Motor Ways of the Sea official definition and after having a complete overview of traffic figures, to propose a model to analyse the best mode to connect different Iberian destinations offered to Consignors, in an attempt to transfer part of the cargo from road to sea option.
CitationMartinez, F. J.; Castells, M. Iberian motorways of the sea. An overview after 15 years of of Van Miert report. A: international conference for traffic and transport engineering. "International Conference on Traffic and Transport Engineering". 2018, p. 313-318.
URIhttp://hdl.handle.net/2117/131139
ISBN978-86-916153-4-5
Other identifiershttp://ijtte.com/uploads/news_files/ICTTE%20Belgrade%202018_Proceedings.pdf
Collections
Share: