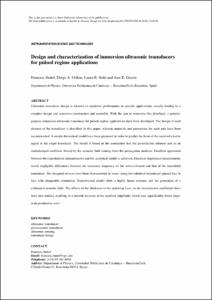 Document typeArticle
Rights accessOpen Access
Abstract
Ultrasonic transducer design is focused to maximize performance in specific applications, usually leading to a complex design and expensive construction and assembly. With the aim to overcome this drawback, a general-purpose immersion ultrasonic transducer for pulsed regime applications have been developed. The design of each element of the transducer is described in this paper, wherein materials and geometries for each part have been recommended. A simple theoretical model have been proposed in order to predict the form of the received electric signal in the target transducer. The model is based in the assumption that the piezoelectric element acts as an underdamped oscillator, forced by the acoustic field coming from the propagation medium. Excellent agreement between the experimental measurements and the analytical model is achieved. Electrical impedance measurements reveal negligible differences between the resonance frequency of the active element and that of the assembled transducer. The designed devices have been characterized in water, using two identical transducers placed face to face with changeable orientation. Experimental results show a highly linear response and the generation of a collimated acoustic field. The effects of the thickness of the matching layer on the transmission coefficient have been also studied, resulting in a smooth decrease in the received amplitude, which may significantly lower large-scale production costs.
CitationSuñol, F. [et al.]. Design and characterization of immersion ultrasonic transducers for pulsed regime applications. "Instrumentation science and technology", 2019, vol. 47, núm. 2, p. 213-232.
URIhttp://hdl.handle.net/2117/131090
DOI10.1080/10739149.2018.1518876
ISSN1073-9149
Publisher versionhttps://www.tandfonline.com/doi/abs/10.1080/10739149.2018.1518876
Collections
Share: