The kinematics of the white dwarf population from the SDSS DR12 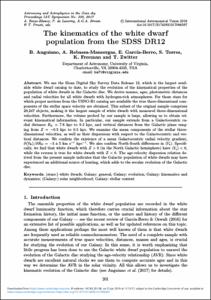 Freeman, K. C.
Document typeConference report
Rights accessOpen Access
Abstract
We use the Sloan Digital Sky Survey Data Release 12, which is the largest avail-able white dwarf catalog to date, to study the evolution of the kinematical properties of thepopulation of white dwarfs in the Galactic disc. We derive masses, ages, photometric distancesand radial velocities for all white dwarfs with hydrogen-rich atmospheres. For those stars forwhich proper motions from the USNO-B1 catalog are available the true three-dimensional com-ponents of the stellar space velocity are obtained. This subset of the original sample comprises20,247 objects, making it the largest sample of white dwarfs with measured three-dimensionalvelocities. Furthermore, the volume probed by our sample is large, allowing us to obtain rel-evant kinematical information. In particular, our sample extends from a Galactocentric ra-dial distanceRG=7.8 kpc to 9.3 kpc, and vertical distances from the Galactic plane rang-ing fromZ=−0.5 kpc to 0.5 kpc. We examine the mean components of the stellar three-dimensional velocities, as well as their dispersions with respect to the Galactocentric and ver-tical distances. We confirm the existence of a mean Galactocentric radial velocity gradient,∂〈VR〉/∂RG=−3±5kms−1kpc−1. We also confirm North-South differences in〈Vz〉. Specifi-cally, we find that white dwarfs withZ>0 (in the North Galactic hemisphere) have〈Vz〉<0,while the reverse is true for white dwarfs withZ<0. The age-velocity dispersion relation de-rived from the present sample indicates that the Galactic population of white dwarfs may haveexperienced an additional source of heating, which adds to the secular evolution of the Galacticdisc.
CitationAnguiano, B. [et al.]. The kinematics of the white dwarf population from the SDSS DR12. A: Access Volume 12, Symposium S330 (Astrometry and Astrophysics in the Gaia sky). "Astronomy and Astrophysics in the Gaia sky Proceedings IAU Symposium No. 330, 2017 A. Recio-Blanco, P. de Laverny, A.G.A. Brown & T. Prusti, eds.". 2017, p. 201-202.
URIhttp://hdl.handle.net/2117/131079
Collections
Share: