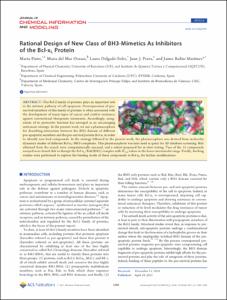 Rubio Martinez, Jaime
Document typeArticle
Rights accessOpen Access
Abstract
The Bcl-2 family of proteins plays an important role in the intrinsic pathway of cell apoptosis. Overexpression of prosurvival members of this family of proteins is often associated with the development of many types of cancer and confers resistance against conventional therapeutic treatments. Accordingly, antagonism of its protective function has emerged as an encouraging anticancer strategy. In the present work, we use a pharmacophore for describing interaction between the BH3 domain of different pro-apoptotic members and the pro-survival protein Bcl-xL in order to identify new lead compounds. In the strategy followed in the present work, the harmacophore was derived from molecular dynamics studies of different Bcl-xL/BH3 complexes. This pharmacophore was later used as query for 3D database screening. Hits obtained from the search were computationally assessed, and a subset proposed for in vitro testing. Two of the 15 compounds assayed were found able to disrupt the Bcl-xL/Bak(BH3) complex with IC50 values in the lower micromolar range. Finally, docking studies were performed to explore the binding mode of these compounds to Bcl-xL for further modifications.
CitationPinto, M. [et al.]. Rational design of new class of BH3-mimetics as inhibitors of the Bcl-X(L) protein. "Journal of chemical information and modeling", Juny 2011, vol. 51, núm. 6, p. 1249-1258.
URIhttp://hdl.handle.net/2117/13106
DOI10.1021/ci100501d
ISSN1549-9596
Collections
Share: