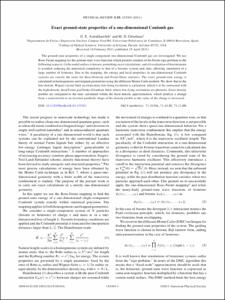 The ground-state properties of a single-component one-dimensional Coulomb gas are investigated. We use Bose-Fermi mapping for the ground-state wave function which permits solution of the Fermi sign problem in the following respects: (i) the nodal surface is known, permitting exact calculations; and (ii) evaluation of determinants is avoided, reducing the numerical complexity to that of a bosonic system and, thus, allowing simulation of a large number of fermions. Due to the mapping, the energy and local properties in one-dimensional Coulomb systems are exactly the same for Bose-Einstein and Fermi-Dirac statistics. The exact ground-state energy is calculated in homogeneous and trapped geometries using the diffusion Monte Carlo method. We show that in the low-density Wigner crystal limit an elementary low-lying excitation is a plasmon, which is to be contrasted with the high-density ideal Fermi gas/Tonks-Girardeau limit, where low-lying excitations are phonons. Exact density profiles are compared to the ones calculated within the local density approximation, which predicts a change from a semicircular to an inverted parabolic shape of the density profile as the value of the charge is increased.
CitationAstrakharchik, G.; Girardeau, M. Exact ground-state properties of a one-dimensional Coulomb gas. "Physical review B, condensed matter and materials physics", 15 Abril 2011, vol. 83, núm. 15, p. 1-4.
URIhttp://hdl.handle.net/2117/13097
DOI10.1103/PhysRevB.83.153303
ISSN1098-0121
Publisher versionhttp://prb.aps.org/abstract/PRB/v83/i15/e153303