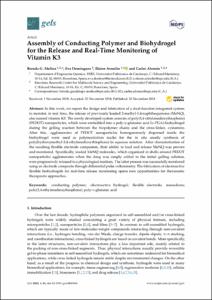 Document typeArticle
PublisherMultidisciplinary Digital Publishing Institute (MDPI)
Rights accessOpen Access
Abstract
In this work, we report the design and fabrication of a dual-function integrated system to monitor, in real time, the release of previously loaded 2-methyl-1,4-naphthoquinone (MeNQ), also named vitamin K3. The newly developed system consists of poly(3,4-ethylenedioxythiophene) (PEDOT) nanoparticles, which were embedded into a poly-¿-glutamic acid (¿-PGA) biohydrogel during the gelling reaction between the biopolymer chains and the cross-linker, cystamine. After this, agglomerates of PEDOT nanoparticles homogeneously dispersed inside the biohydrogel were used as polymerization nuclei for the in situ anodic synthesis of poly(hydroxymethyl-3,4-ethylenedioxythiophene) in aqueous solution. After characterization of the resulting flexible electrode composites, their ability to load and release MeNQ was proven and monitored. Specifically, loaded MeNQ molecules, which organized in shells around PEDOT nanoparticles agglomerates when the drug was simply added to the initial gelling solution, were progressively released to a physiological medium. The latter process was successfully monitored using an electrode composite through differential pulse voltammetry. The fabrication of electroactive flexible biohydrogels for real-time release monitoring opens new opportunities for theranostic therapeutic approaches.
CitationMolina, B.G. [et al.]. Assembly of Conducting Polymer and Biohydrogel for the Release and Real-Time Monitoring of Vitamin K3. "Gels", 28 Novembre 2018, vol. 4, núm. 4, p. 1-14.
URIhttp://hdl.handle.net/2117/130953
DOI10.3390/gels4040086
ISSN2310-2861
Publisher versionhttps://www.mdpi.com/2310-2861/4/4/86
Collections
Share: