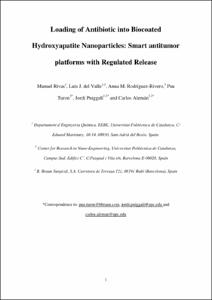 Document typeArticle
PublisherAmerican Chemical Society (ACS)
Rights accessOpen Access
Abstract
In this research we propose a nanoplatform for anticancer therapy that is based on the combination of three components: (1) an antibiotic to target selectively the mitochondria of cancer cells, inhibiting their functions; (2) mineral nanoparticles (NPs) able to encapsulate the antibiotic and to enter into the cells across the cell membrane; and (3) a biocoating to protect the antibiotic during and/or after its regulated release, increasing its therapeutic efficacy. Chloramphenicol (CAM), a prototypical wide-spectrum antibiotic, has been used to induce mitochondrial-dysfunctions in cancer cells. Different in situ synthetic strategies have been tested to load such antibiotic into both crystalline hydroxyapatite (cHAp) and amorphous calcium phosphate (ACP) NPs. cHAp NPs showed higher loading capacity, in terms of encapsulation and superficial adsorption of CAM, and slower antibiotic release than ACP NPs. On the other hand, the protecting role played by biocoatings based on pyrophosphate and, especially, triphosphate was greater than that of biophosphonates, the anticancer therapeutic efficacy of CAM being maximized by the former. In vitro studies using healthy and cancer cell lines have demonstrated that in situ CAM-loaded cHAp NPs coated with triphosphate selectively kill a great population of cancer cells, evidencing the potential of this nanoplatform in cancer treatment.
CitationRivas, M. [et al.]. Loading of antibiotic into biocoated hydroxyapatite nanoparticles: smart antitumor platforms with regulated release. "ACS biomaterials science & engineering", 26 Juliol 2018, vol. 4, núm. 9, p. 3234-3245.
URIhttp://hdl.handle.net/2117/130946
DOI10.1021/acsbiomaterials.8b00353
ISSN2373-9878
Publisher versionhttps://pubs.acs.org/doi/abs/10.1021/acsbiomaterials.8b00353
Collections
Share: