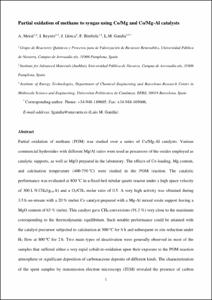 Bimbela, F.
Gandía, L. M.
Document typeArticle
Rights accessOpen Access
Abstract
Partial oxidation of methane (POM) was studied over a series of Co/Mg-Al catalysts. Various commercial hydroxides with different Mg/Al ratios were used as precursors of the oxides employed as catalytic supports, as well as MgO prepared in the laboratory. The effects of Co loading, Mg content, and calcination temperature (400–750¿°C) were studied on the POM reaction. The catalytic performance was evaluated at 800¿°C in a fixed-bed tubular quartz reactor under a high space velocity of 300¿L N CH4/(gcat¿h) and a O2/CH4 molar ratio of 0.5. A very high activity was obtained during 4¿h on-stream with a 20¿wt. % Co catalyst prepared with a Mg-Al mixed oxide support having a MgO content of 63¿wt. %. This catalyst gave CH4 conversions (91.3%) very close to the maximum corresponding to the thermodynamic equilibrium. Such notable performance could be attained with the catalyst precursor subjected to calcination at 500¿°C for 6¿h and subsequent in situ reduction under H2 flow at 800¿°C for 2¿h. Two main types of deactivation mechanisms were generally observed in most of the samples that suffered either a very rapid cobalt re-oxidation upon their exposure to the POM reaction atmosphere or significant deposition of carbonaceous deposits of different kinds. The characterization of the spent samples by transmission electron microscopy (TEM) revealed the presence of carbon deposits of different nature in the Mg/Al samples having a high MgO content, including filamentous carbon (whiskers), onion-shell like sheets and/or amorphous encapsulating layers. Conversely, no carbon deposits were observed in the spent Co/MgO catalyst, which underwent oxidation of the relatively less dispersed surface Co sites to form clearly defined crystals of Co oxides with particle diameters typically ranging between 25 and 100¿nm.
CitationMoral, A. [et al.]. Partial oxidation of methane to syngas using Co/Mg and Co/Mg-Al oxide supported catalysts. "Catalysis today", 1 Agost 2019, vol. 333, p. 259-267.
URIhttp://hdl.handle.net/2117/130912
DOI10.1016/j.cattod.2018.04.003
ISSN0920-5861
Publisher versionhttps://www.sciencedirect.com/science/article/pii/S0920586118303766
Collections
Share: