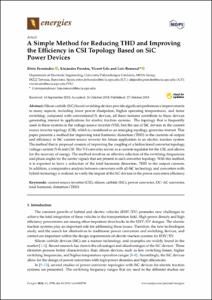 Silicon carbide (SiC)-based switching devices provide significant performance improvements in many aspects, including lower power dissipation, higher operating temperatures, and faster switching; compared with conventional Si devices, all these features contribute to these devices generating interest in applications for electric traction systems. The topology that is frequently used in these systems is the voltage source inverter (VSI), but the use of SiC devices in the current source inverter topology (CSI), which is considered as an emerging topology, generates interest. This paper presents a method for improving total harmonic distortion (THD) in the currents of output and efficiency in SiC current source inverter for future application in an electric traction system. The method that is proposed consists of improving the coupling of a bidirectional converter topology, voltage current (V-I) and CSI. The V-I converter serves as a current regulator for the CSI, and allows for the recovery of energy. The method involves an effective selection of the switching frequencies and phase angles for the carrier signals that are present in each converter topology. With this method, it is expected to have a reduction of the total harmonic distortion, THD in the output currents. In addition, a comparative analysis between converters with all-SiC technology and converters with hybrid technology is realized, to verify the impact of the SiC devices in the power converters efficiency.
CitationFernández, E. [et al.]. A simple method for reducing THD and improving the efficiency in CSI topology based on SiC power devices. "Energies", 17 Octubre 2018, vol. 11, núm. 10, p. 2798-1-2798-23.
URIhttp://hdl.handle.net/2117/130889
DOI10.3390/en11102798
ISSN1996-1073
Publisher versionhttps://www.mdpi.com/1996-1073/11/10/2798