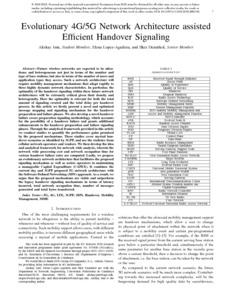 Document typeArticle
PublisherInstitute of Electrical and Electronics Engineers (IEEE)
Rights accessOpen Access
European Commission's project5G-AURA - Application-aware User-centric Programmable Architectures for 5G Multi-tenant Networks (EC-H2020-675806)
Abstract
Future wireless networks are expected to be ultra-dense and heterogeneous not just in terms of the number and type of base stations but also in terms of the number of users and the application types they access. Such a network architecture will require mobility management mechanisms that adapt rapidly to these highly dynamic network characteristics. In particular, the optimality of the handover signaling within these future network architectures will be extremely critical given their density and heterogeneity. In this paper, the optimality is relevant for both the total amount of signaling created and the total delay per handover process. In this paper, we first present a novel and optimized message mapping and signaling mechanism for the handover preparation and failure phases. We also develop a novel handover failure aware preparation signaling methodology, which accounts for the possibility of a handover failure and grants additional enhancements to the handover preparation and failure signaling phases. Through the analytical framework provided in this paper, we conduct studies to quantify the performance gains promised by the proposed mechanisms. These studies cover myriad handover scenarios as identified by 3GPP and use the statistics from cellular network operators and vendors. We then develop the idea and analytical framework for network wide analysis, in which the network wide processing cost and network occupation time for various handover failure rates are computed. Finally, we propose an evolutionary network architecture that facilitates the proposed signaling mechanism as well as assists operators in maintaining a manageable capital expenditure. It combines the current day and 3GPP proposed 5G network architecture with the software-defined networking approach. As a result, we argue that the proposed mechanisms are viable and outperform the legacy handover signaling mechanisms in terms of latency incurred, total network occupation time, number of messages generated, and total bytes transferred.
CitationJain, A.; Lopez-Aguilera, E.; Demirkol, I. Evolutionary 4G/5G network architecture assisted efficient handover signaling. "IEEE access", 6 Desembre 2018, vol. 7, p. 256-283.
URIhttp://hdl.handle.net/2117/130871
DOI10.1109/ACCESS.2018.2885344
ISSN2169-3536
Publisher versionhttps://ieeexplore.ieee.org/document/8565842
Collections
Share: