Learning from Enna Bassa : the città diffusa in the definition of a third landscape 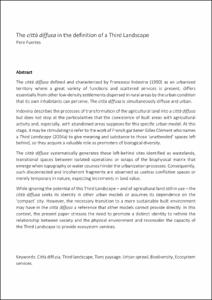 Document typeArticle
Rights accessOpen Access
Abstract
The città diffusa defined and characterised by Francesco Indovina (1990) as an urbanized territory where a great variety of functions and dispersed services is present, differs essentially from other low-density settlements spread in rural areas by the urban condition that its own inhabitants can recognise. The città diffusa is simultaneously diffuse and urban. Indovina describes the processes of transformation of the agricultural land into a città diffusa but does not stop at the particularities that the coexistence of built areas with agricultural activity and, especially, with abandoned areas supposes for this specific urban model. At this stage, it may be stimulating to refer to the work of the French gardener Gilles Clément who names a Third Landscape (2004) to give meaning and substance to those ‘unattended’ spaces left behind, so they acquire a valuable role as promoters of biological diversity. The città diffusa systematically generates those left behind sites identified as wastelands, transitional spaces between isolated operations or scraps of the biophysical matrix that emerge when topography or water courses hinder the urbanization processes. Consequently, such disconnected and incoherent fragments are perceived as useless conflictive spaces or merely temporary in nature, expecting increments in land value. While ignoring the potential of this Third Landscape – and of agricultural land still in use – the città diffusa seeks its identity in other urban models or assumes its dependence on the ‘compact’ city. However, the necessary transition to a more sustainable built environment may have in the città diffusa a reference that other models cannot provide directly. In this context, the present paper stresses the need to promote a distinct identity to rethink the relationship between society and the physical environment and reconsider the capacity of the Third Landscape to provide ecosystem services.
CitationFuertes, P. Learning from Enna Bassa : the città diffusa in the definition of a third landscape. "PhD_KORE REVIEW", Juny 2018, núm. 9/2018, p. 109-120.
URIhttp://hdl.handle.net/2117/130861
ISSN2039-5434
Publisher versionhttps://www.unikore.it/index.php/phdkore
Collections
Share: