Plant genebanks: Present situation and proposals for their improvement. The case of the Spanish network 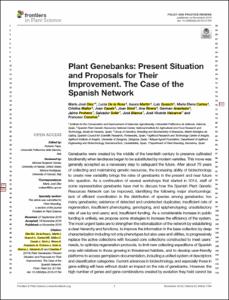 Genebanks were created by the middle of the twentieth century to preserve cultivatedbiodiversity when landraces began to be substituted by modern varieties. This move wasgenerally accepted as a necessary step to safeguard the future. After about 75 yearsof collecting and maintaining genetic resources, the increasing ability of biotechnologyto create new variability brings the roles of genebanks in the present and near futureinto question. As a continuation of several workshops that started in 2014, staff ofsome representative genebanks have met to discuss how the Spanish Plant GeneticResources Network can be improved, identifying the following major shortcomings
CitationDíez, M. J. [et al.]. Plant genebanks: Present situation and proposals for their improvement. The case of the Spanish network. "Advances in Intelligent Systems and Computing", 1 Gener 2018.
URIhttp://hdl.handle.net/2117/130763
DOI10.3389/fpls.2018.01794
ISSN2194-5357
Publisher versionhttps://www.frontiersin.org/articles/10.3389/fpls.2018.01794/full