The polysemy of the words that children learn over time 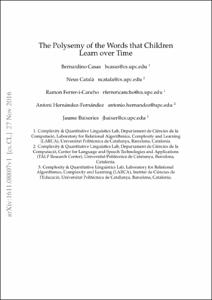 Document typeArticle
Rights accessOpen Access
All rights reserved. This work is protected by the corresponding intellectual and industrial property rights. Without prejudice to any existing legal exemptions, reproduction, distribution, public communication or transformation of this work are prohibited without permission of the copyright holder
Abstract
Here we study polysemy as a potential learning bias in vocabulary learning in children. We employ a massive set of transcriptions of conversations between children and adults in English, to analyze the evolution of mean polysemy in the words produced by children whose ages range between 10 and 60 months. Our results show that mean polysemy in children increases over time in two phases, i.e. a fast growth till the 31st month followed by a slower tendency towards adult speech. In contrast, no dependency with time is found in adults. This may suggest that children have a preference for non-polysemous words in their early stages of vocabulary acquisition. Our hypothesis is twofold: (a) polysemy is a standalone bias or (b) polysemy is a side-effect of other biases. Interestingly, the bias for low polysemy above weakens when controlling by syntactic category (noun, verb, adjective or adverb). The pattern of the evolution of polysemy suggests that both hypotheses may apply to some extent, and that (b) would originate from a combination of the well-known preference for nouns and the lower polysemy of nouns with respect to other syntactic categories.
CitationCasas, B. [et al.]. The polysemy of the words that children learn over time. "Interaction studies", Desembre 2018, vol. 19, núm. 3, p. 389-426.
URIhttp://hdl.handle.net/2117/130754
DOI10.1075/is.16036.cas
ISSN1572-0373
Publisher versionhttps://www.jbe-platform.com/content/journals/10.1075/is.16036.cas
Other identifiershttps://arxiv.org/pdf/1611.08807.pdf
Collections
Share: