Analysis of friction coupling and the Painlevé paradox in multibody systems 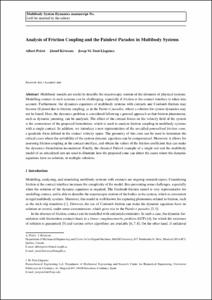 Document typeArticle
Rights accessOpen Access
Abstract
Multibody models are useful to describe the macroscopic motion of the elements of physical systems. Modeling contact in such systems can be challenging, especially if friction at the contact interface is taken into account. Furthermore, the dynamics equations of multibody systems with contacts and Coulomb friction may become ill-posed due to friction coupling, as in the Painlevé paradox, where a solution for system dynamics may not be found. Here, the dynamics problem is considered following a general approach so that friction phenomena, such as dynamic jamming, can be analyzed. The effect of the contact forces on the velocity field of the system is the cornerstone of the proposed formulation, which is used to analyze friction coupling in multibody systems with a single contact. In addition, we introduce a new representation of the so-called generalized friction cone, a quadratic form defined in the contact velocity space. The geometry of this cone can be used to determine the critical cases where the solvability of the system dynamic equations can be compromised. Moreover, it allows for assessing friction coupling at the contact interface, and obtaining the values of the friction coefficient that can make the dynamics formulation inconsistent. Finally, the classical Painlevé example of a single rod and the multibody model of an articulated arm are used to illustrate how the proposed cone can detect the cases where the dynamic equations have no solution, or multiple solutions.
CitationPeiret, A.; Kövecses, J.; Font-Llagunes, J.M. Analysis of friction coupling and the Painlevé paradox in multibody systems. "Multibody system dynamics", Març 2019, vol. 45, núm. 3, p. 361-378.
URIhttp://hdl.handle.net/2117/130658
DOI10.1007/s11044-018-09656-y
ISSN1384-5640
Publisher versionhttps://link.springer.com/article/10.1007/s11044-018-09656-y
Collections
Share: