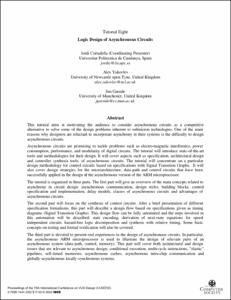 Yakovlev, Alex
Garside, Jim
Document typeConference report
PublisherInstitute of Electrical and Electronics Engineers (IEEE)
Rights accessOpen Access
Abstract
Summary form only given. This tutorial aims at motivating the audience to consider asynchronous circuits as a competitive alternative to solve some of the design problems inherent to submicron technologies. One of the main reasons why designers are reluctant to incorporate asynchrony in their systems is the difficulty to design asynchronous circuits. Asynchronous circuits are promising to tackle problems such as electro-magnetic interference, power consumption, performance, and modularity of digital circuits. The tutorial will introduce state-of-the-art tools and methodologies for their design. It will cover aspects such as specification, architectural design and controller synthesis tools, of asynchronous circuits. The tutorial will concentrate on a particular design methodology for control circuits based on specifications with signal transition graphs. It will also cover design strategies for the microarchitecture, data-path and control circuits that have been successfully applied in the design of the asynchronous version of the ARM microprocessor.
CitationCortadella, J.; Yakovlev, A.; Garside, J. Logic design of asynchronous circuits. A: IEEE International Conference on VLSI Design. "7th Asia and South Pacific Design Automation Conference; 15th International Conference on VLSI Design: 7-11 January 2002, Bangalore, India: proceedings". Institute of Electrical and Electronics Engineers (IEEE), 2002, p. 26-27.
URIhttp://hdl.handle.net/2117/130654
DOI10.1109/ASPDAC.2002.994880
ISBN0-7695-1441-3
Publisher versionhttps://ieeexplore.ieee.org/document/994880
Collections
Share: