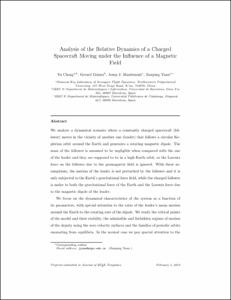 Except where otherwise noted, content on this work is licensed under a Creative Commons license : Attribution-NonCommercial-NoDerivs 3.0 Spain
Abstract
We analyse a dynamical scenario where a constantly charged spacecraft (follower) moves in the vicinity of another one (leader) that follows a circular Keplerian orbit around the Earth and generates a rotating magnetic dipole. The mass of the follower is assumed to be negligible when compared with the one of the leader and they are supposed to be in a high-Earth orbit, so the Lorentz force on the follower due to the geomagnetic field is ignored. With these assumptions, the motion of the leader is not perturbed by the follower and it is only subjected to the Earth’s gravitational force field, while the charged follower is under to both the gravitational force of the Earth and the Lorentz force due to the magnetic dipole of the leader. We focus on the dynamical characteristics of the system as a function of its parameters, with special attention to the ratio of the leader’s mean motion around the Earth to the rotating rate of the dipole. We study the critical points of the model and their stability, the admissible and forbidden regions of motion of the deputy using the zero velocity surfaces and the families of periodic orbits emanating from equilibria. In the normal case we pay special attention to the periodic orbits of elliptic type and to the families of 2D tori surrounding them that are computed by means of a parameterisation method. The result is a fine catalog of orbits together with an accurate dynamical description suitable to researchers interested in potential applications of satellite formation flight using this kind of technology.
CitationCheng, Y. [et al.]. Analysis of the relative dynamics of a charged spacecraft moving under the influence of a magnetic field. "Communications in nonlinear science and numerical simulation", 1 Setembre 2018, vol. 62, p. 307-338.
URIhttp://hdl.handle.net/2117/130643
DOI10.1016/j.cnsns.2018.02.023
ISSN1007-5704
Publisher versionhttps://www.sciencedirect.com/science/article/pii/S1007570418300571
Collections
Share: