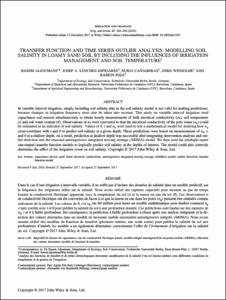 In variable interval irrigation, simply including soil salinity data in the soil salinity model is not valid for making predictions, because changes in irrigation frequency must also be taken into account. This study on variable interval irrigation used capacitance soil sensors simultaneously to obtain hourly measurements of bulk electrical conductivity (sb), soil temperature (t) and soil water content (¿). Observations of sb were converted so that the electrical conductivity of the pore water (sp) could be estimated as an indicator of soil salinity. Values of ¿, t and sp were used to test a mathematical model for studying how sp cross-correlates with t and ¿ to predict soil salinity at a given depth. These predictions were based on measurements of sp, t, and ¿ at a shallow depth. As a result, prediction at shallow depth was successful after integrating intervention analysis and outlier detection into the seasonal autoregressive integrated moving average (ARIMA) model. We then used the (multiple-input/one-output) transfer function models to logically predict soil salinity at the depths of interest. The model could also correctly determine the effect of the irrigation event on soil salinity
CitationAljoumani, B. [et al.]. Transfer function and time series outlier analysis: modelling Soil salinity in loamy sand soil by including the influences of irrigation management and soil temperature. "Irrigation and drainage", 13 Desembre 2017, vol. 67, núm. 2, p. 282-294
URIhttp://hdl.handle.net/2117/130637
DOI10.1002/ird.2187
ISSN1531-0353
Publisher versionhttps://onlinelibrary.wiley.com/doi/10.1002/ird.2187