From manifolds to Lagrangian coherent structures in galactic bar models 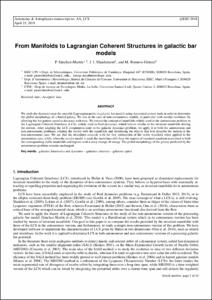 Romero Gómez, Merce
Document typeArticle
PublisherEDP Sciences
Rights accessOpen Access
Abstract
We study the dynamics near the unstable Lagrangian points in galactic bar models using dynamical system tools in order to determine the global morphology of a barred galaxy. We aim at the case of non-autonomous models, in particular with secular evolution, by allowing the bar pattern speed to decrease with time. We have extended the concept of manifolds widely used in the autonomous problem to the Lagrangian coherent structures (LCS), widely used in fluid dynamics, which behave similar to the invariant manifolds driving the motion. After adapting the LCS computation code to the galactic dynamics problem, we apply it to both the autonomous and non-autonomous problems, relating the results with the manifolds and identifying the objects that best describe the motion in the non-autonomous case. We see that the strainlines coincide with the first intersection of the stable manifold when applied to the autonomous case, while, when the secular model is used, the strainlines still show the regions of maximal repulsion associated to both the corresponding stable manifolds and regions with a steep change of energy. The global morphology of the galaxy predicted by the autonomous problem remains unchanged
CitationSánchez-Martin, P.; Masdemont, J.J.; Romero, G. From manifolds to Lagrangian coherent structures in galactic bar models. "Astronomy & astrophysics", 16 Octubre 2018, vol. 618, p. A72-1-A72-14.
URIhttp://hdl.handle.net/2117/130304
DOI10.1051/0004-6361/201833451
ISSN1432-0746
Publisher versionhttps://www.aanda.org/articles/aa/abs/2018/10/aa33451-18/aa33451-18.html
Collections
Share: