I came to look at it as part of a city, rather than part of a museum. It’s a fragment of the urban experience… It’s a space of our time 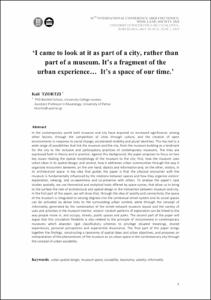 Show full item record
Tzortzi, Kali
Document typeConference report
PublisherGIRAS. Universitat Politècnica de Catalunya
Rights accessOpen Access
Abstract
In the contemporary world both museum and city have acquired an increased significance, among other factors, through the competition of cities through culture, and the creation of open environments in response to social change, accelerated mobility and plural identities. This has led to a wide range of possibilities that link the museum and the city, from the museum building as a landmark for the city to the inclusive and participatory practices of contemporary museums. The links are expressed both in theory and in practice. Against this background, the paper proposes to focus on two key issues relating the spatial morphology of the museum to the city: first, how the museum uses urban ideas in its spatial design; and second, how it addresses urban communities through the way it organizes encounters between, on the one hand, objects and information and, on the other, visitors, in its architectural space. A key idea that guides the paper is that the physical encounter with the museum is fundamentally influenced by the relations between spaces and how they organize visitors’ exploration, viewing, and co-­‐awareness and co-­‐presence with others. To analyse the paper’s case studies spatially, we use theoretical and analytical tools offered by space syntax, that allow us to bring to the surface the role of architectural and spatial design in the interaction between museum and city. In the first part of the paper, we will show that, through the idea of axiality and connectivity, the space of the museum is integrated to varying degrees into the contextual street-­‐system and its social spaces can be activated by dense links to the surrounding urban context; while through the concept of informality, generated by the combination of the street-­‐network museum layout and the variety of uses and activities in the museum interior, visitors’ random patterns of exploration can be linked to the way people move in, and occupy, streets, public spaces and parks. The second part of the paper will argue that this circulation flexibility is also related to the principle of inclusiveness in contemporary museums which abandon rigid classificatory schemes to privilege situated meanings, shared experiences, personal perceptions and experiential dissonance. The final part of the paper brings together the findings, constructing a taxonomy of spatial ideas and urban objectives, and proposes an interpretation of the phenomenon of the museum as an urban space in the contemporary city through the concept of urban sociability.
Description
Ponència presentada a la sessió 11
CitationTzortzi, K. I came to look at it as part of a city, rather than part of a museum. It’s a fragment of the urban experience… It’s a space of our time. A: Arquitectonics. "International Conference Arquitectonics Network: Mind, Land and Society, Barcelona, 29-31 May, 1 June 2018: Final papers". Barcelona: GIRAS. Universitat Politècnica de Catalunya, 2018.
URIhttp://hdl.handle.net/2117/130255
ISBN978-84-09-02652-4
Collections
Share: