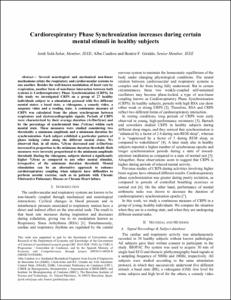 Document typeConference report
Rights accessOpen Access
Abstract
Several neurological and mechanical non-linear mechanisms relate the respiratory and cardiovascular systems to one another. Besides the well-known modulation of heart rate by respiration, another form of non-linear interaction between both systems is Cardiorespiratory Phase Synchronization (CRPS). In this study we investigated CRPS on a group of 27 healthy individuals subject to a stimulation protocol with five different mental states: a basal state, a videogame, a comedy video, a suspense video and a reading state. A continuous measure of CRPS was calculated from the phase synchrogram between respiratory and electrocardiographic signals. Periods of CRPS were characterized by their average duration (AvDurSync) and by the percentage of synchronized time (%Sync) within each mental state. These measures were studied considering two thresholds: a minimum amplitude and a minimum duration for synchronization. Each subject exhibited a particular pattern of phase locking ratios along the different mental states. We observed that, in all states, %Sync decreased and AvDurSync increased in proportion to the minimum duration threshold. Both measures were inversely proportional to the minimum amplitude threshold. During the videogame, subjects showed a significantly higher %Sync as compared to any other mental stimulus, irrespective of the minimum duration threshold. Mental stimulation can be an alternative approach to enhance cardiorespiratory coupling when subjects have difficulties to perform aerobic exercise, such as in patients with Chronic Obstructive Pulmonary Disease or Chronic Heart failure.
CitationSolà Soler, J.; Cuadros, A.; Giraldo, B. Cardiorespiratory phase synchronization increases during certain mental stimuli in healthy subjects. A: Annual International Conference of the IEEE Engineering in Medicine and Biology Society. "Proceedings of the 40th Annual International Conference of the IEEE Engineering in Medicine and Biology Society". 2018, p. 5298-5301.
URIhttp://hdl.handle.net/2117/130194
DOI10.1109/EMBC.2018.8513471
Other identifiershttps://ieeexplore.ieee.org/document/8513471
Collections
Share: