Preservation of the Great Sites in China, Han Chang’an city as case study 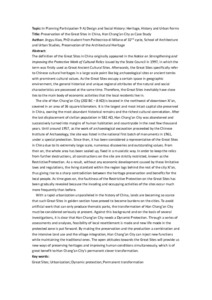 Show full item record
Xiao, Jingyu
Document typeConference report
PublisherGIRAS. Universitat Politècnica de Catalunya
Rights accessOpen Access
All rights reserved. This work is protected by the corresponding intellectual and industrial property rights. Without prejudice to any existing legal exemptions, reproduction, distribution, public communication or transformation of this work are prohibited without permission of the copyright holder
Abstract
The definition of the Great Sites in China originally appeared in the Notice on Strengthening and Improving the Protective Work of Cultural Relics issued by the State Council in 1997, in which the term was firstly used as Great Ancient Cultural Sites. Afterwards, the Great Sites specifically refer to Chinese cultural heritages in a large scale point like big archaeological sites or ancient tombs with prominent cultural values. As the Great Sites occupy a certain space in geographic environment, the general historical and unique regional attributes of the natural and social characteristics are possessed at the same time. Therefore, the Great Sites inevitably have close ties to the main body of economic activities that the local residents live in. The site of Han Chang’an City (202 BC – 8 AD) is located in the northwest of downtown Xi'an, covered in an area of 36 square kilometers. It is the largest and most intact capital site preserved in China, owning the most abundant historical remains and the richest cultural connotation. After the last displacement of civilian population in 582 AD, Han Chang’an City was abandoned and successively turned into margins of human habitation and countryside in the next few thousand years. Until around 1957, as the work of archaeological excavation proceeded by the Chinese Institute of Archaeology, the site was listed in the national first batch of monuments in 1961, under a special protection. Since then, it has been considered a representative of the Great Sites in China due to its extremely large scale, numerous discoveries and outstanding values. From then on, the whole area has been sealed up, fixed in a museistic way. In order to keep the relics from further destructions, all constructions on the site are strictly restricted, known as the Restrictive Protection. As a result, without any economic development caused by these limitative laws and regulations, the living standard within the region lags behind the rest of the city Xi’an, thus giving rise to a sharp contradiction between the heritage preservation and benefits for the local people. As time goes on, the faultiness of the Restrictive Protection on the Great Sites has been gradually revealed because the invading and occupying activities of the sites occur much more frequently than before. With a rapid urbanization unparalleled in the history of China, lands are becoming so scarce that such Great Sites in golden section have proved to become burdens on the cities. To avoid artificial work that can only produce thematic parks, the transformation of Han Chang’an City must be considered seriously at present. Against this background and on the basis of several investigations, it is clear that Han Chang’an City needs a Dynamic Protection. Through a series of assessments and analyses, feasibility of local resettlement is made and new life mode in the protected zone is put forward. By making the preservation and the production a combination and the intensive land use and the village integration, Han Chang’an City can inject new functions while maintaining the traditional ones. The open attitudes towards the Great Sites will provide us new ways of preserving heritages and improving human conditions simultaneously, which is of great benefit to Han Chang’an City’s permanent clever transformation.
Description
Ponència presentada a la sessió 9
Location
1: Weiyang, Xi'an, Shaanxi, Xina, 710016
CitationXiao, J. Preservation of the Great Sites in China, Han Chang’an city as case study. A: Arquitectonics. "International Conference Arquitectonics Network: Mind, Land and Society, Barcelona, 29-31 May, 1 June 2018: Final papers". Barcelona: GIRAS. Universitat Politècnica de Catalunya, 2018.
URIhttp://hdl.handle.net/2117/130174
ISBN978-84-09-02652-4
Collections
Share: