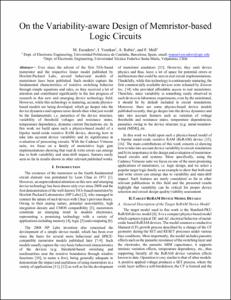 Ever since the advent of the first TiO 2 -based memristor and the respective linear model published by Hewlett-Packard Labs, several behavioral models of memristors have been published. Such models capture the fundamental characteristics of resistive switching behavior through simple equations and rules, so they received a lot of attention and contributed significantly to the fast progress of research in this new and emerging device technology field. However, while this technology is maturing, accurate physics-based models are being developed, which go deeper into the device dynamics and capture more details than what just would be the fundamentals: i.e. parasitics of the device structure, variability of threshold voltages and resistance states, temperature dependency, dynamic current fluctuations, etc. In this work we build upon such a physics-based model of a bipolar metal-oxide resistive RAM device, showing how to take into account device variability and its significance in evaluation of processing circuits. With the Cadence Virtuoso suite, we focus on a family of memristive logic gate implementations showing that read & write errors can emerge due to both variability and state-drift impact, features rarely seen so far in results shown in other relevant published works.

© 2018 IEEE. Personal use of this material is permitted. Permission from IEEE must be obtained for all other uses, in any current or future media, including reprinting/republishing this material for advertising or promotional purposes,creating new collective works, for resale or redistribution to servers or lists, or reuse of any copyrighted component of this work in other works.
CitationEscudero, M. [et al.]. On the variability-aware design of memristor-based logic circuits. A: IEEE International Conference on Nanotechnology. "18th International Conference on Nanotechnology (IEEE-NANO): Cork, Ireland: 23-26 July 2018". Institute of Electrical and Electronics Engineers (IEEE), 2018, p. 1-4.
URIhttp://hdl.handle.net/2117/130150
DOI10.1109/NANO.2018.8626367
ISBN978-1-5386-5337-1
Publisher versionhttps://ieeexplore.ieee.org/document/8626367